Posted by Chris Becker at 4:58 AM No comments:

Widow's Walk and Vigil screenings in 2020.

Two videos I scored for multidisciplinary artist Jil Guyon will screen next year. Our most recent collaboration, Widow's Walk has been selected for the Rome Prisma Film Awards and will be screened next month, January 2020, in Italy. And an earlier collaboration of ours titled Vigil will screen at Traverse Video in Toulouse, France in March 2020.

Shot in southern Iceland, Widow’s Walk portrays the Widow character as fated with the Sisyphean task of walking up and down a desolate hill in an effort to conquer her grief. Her existential dilemma is further destabilized by troubling memories and a precarious future.
Posted by Chris Becker at 7:10 AM No comments:

Ambient Avenues Concert Series at the Silos on Sawyer, November 16, 2019 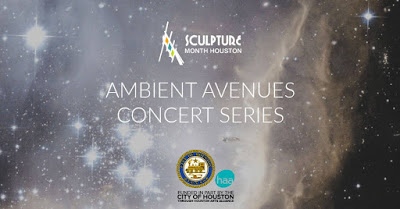 Sculpture Month Houston at the Silos on Sawyer is up through November 30, 2019, featuring some of the most innovative multi-dimensional site specific work out there. I will be performing a 30-minute set of orignal music on Saturday, Novemver 16th at 3 p.m. I'm imagining the music as a soundtrack for a walk through the Silos. My understanding is I'll be set up somewhere inside, hopefully pushing the air a bit. Live programming curated by artists Felipe and Meghan Lopez continues throughout the month, you can check out the full schedule here >> http://sculpturemonthhouston.org/events-2019

I wrote about Felipe and Meghan for the magazine Houston CityBook. That article is online here.


Posted by Chris Becker at 7:06 AM No comments: 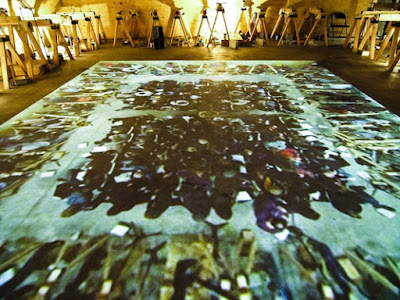 I am honored to be a part of this upcoming performance of composer, sound artist, and sculptor Douglas Henderson's epic Music for 150 Carpenters at the Berman Museum of Art, October 26, 2019. I will be assisting Doug in teaching the piece to a team of "lead carpenters," who will then conduct their crews in two performances of the work. It should be a lot of fun.

I interviewed Doug back in 2009 ahead of the Brooklyn premiere of Music for 100 Carpenters, and he provided plenty of insight into his compositional and recording processes. You can check out the interview here.

“In celebration of Ursinus College’s 150th anniversary, the Berman Museum of Art’s 30th anniversary, and the many individuals who have collaborated in the building of our remarkable institution, the museum will present a special performance piece by Douglas Henderson titled Music for 150 Carpenters.

“Based on Henderson’s Music for 100 Carpenters, first conducted in 2009 in Brooklyn, this site-specific, multimedia piece will include a 30-minute live performance, where the audience will sit in the middle of the Main Gallery. Surrounding them along the perimeter will be 150 carpenters, consisting of not only professional, regional carpenters, but local artists, museum professionals, Ursinus faculty and staff, and of course, students. Henderson will compose an immersive sound performance featuring 150 workers, 150 sawhorses, 150 hammers, and some 10,000 nails, working in unison to create a unique score. Under the guidance of job supervisors, the sounds of construction will become waves of tonal murmur throughout the gallery. Tool belts, sweat, and lunchboxes will also be a part of the score that celebrates the college’s anniversaries with pomp, while acknowledging the diverse sources of physical and intellectual labor that are at the core of every academic and art institution.”
Posted by Chris Becker at 2:11 PM No comments:

Full score for Who You Once Were now available on Bandcamp


This is the full score for Who You Once Were, my collaboration with visual artist Lillian Warren and dancer Annie Arnoult. Who You Once Were was performed August 23 and 24, 2019 at Aurora Picture Show, Houston, TX.

“The idea for this piece came from the personal experience of my mother’s gradual and intermittent memory loss, and my emotional reactions as our relationship changes. Annie, Chris, and I worked as a team to draw on our collective experience of how memories are embedded in objects, splintered and fractured by time, triggered by sounds, and lived through the body.” - Lillian Warren

Rehearsal and performance photos by Lillian Warren.
Posted by Chris Becker at 7:33 AM No comments:

Who You Once Were Video


This is a four-minute composite of just a few segments from Who You Once Were, a multimedia collaboration between Lillian Warren (video and project direction), Annie Arnoult (movement), and Chris Becker (original score). Performed at Aurora Picture Show on August 23 and 24, 2019. Both performances were sold out, and the audience response to the work was incredible.
Posted by Chris Becker at 4:27 PM No comments: