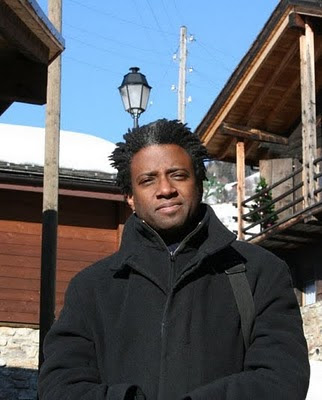 Writer and musician Michael Veal is the author of Dub: Soundscapes and Shattered Songs in Jamaican Reggae and Fela: Life and Times of an African Musical Icon..

Michael Veal’s book Dub had a profound impact on me as a composer when it was released in 2007. There are a lot of composers today who talk about the influence of club music on their work. But the influence of Jamaica – and specifically the innovations of producers/engineers/artists who pioneered many recording and compositional techniques we take for granted these days – is often absent from the discussion. Veal’s book not only connects dub to today’s popular music, but to early to mid 20th century and 21st century forms of electronic composition as well.

Chris Becker: Your book Dub provides a history and musical analysis of the music including a section entitled “Studio Technology and Compositional Strategies of the Dub Mix” where you list and explain the compositional and recording techniques that distinguish dub as a genre of music distinct from jazz, rock and roll, and/or classical composition. Dub’s influence on popular music is made crystal clear as a result of this analysis. But what I also took away from your book was how my own compositional concepts have precedent in the work of dub’s pioneers - in part because I use the recording studio as a compositional tool. I also realized that techniques and strategies of dub could be utilized to produce music that might not even sound remotely like dub!

Did your study of dub reveal any musical or conceptual tools that you have since utilized in your own music (with Aqua Ife or other projects)? If yes, can you elaborate?

Michael Veal: Dub is one of the forms of music that - in its ambient aspects - helped me appreciate the sublimities of what could be achieved in the studio. And I love the way that the minimal techno people in Berlin and Koln have codified certain aspects of those Jamaican advances. I use some of those techniques in my music with the Aqua Ife small unit, but currently in a very subtle, embryonic form. We haven't released anything yet but we've been working on a CD project and I hope to have something out in 2010. The goal is to find a fertile meeting ground between the traditional conception of "note-based" music and the potentials of sound recording as an aesthetic medium on its own terms. Someone like Daniel Lanois achieves this by approaching the studio very self-consciously as a musical instrument. I'm sure that this way of thinking about things will increasingly have transformative implications for improvised music; in fact, it is already happening!

Over time, some of those concepts will also infuse the sound of the Aqua Ife big band. That band has a funky, Afrobeat-jazz sound right now, and over time I plan to take that sound on a journey into the same imaginative realms that I associate with Nathaniel Mackey, Octavia Butler, Italo Calvino, Samuel Delany - people like that. That vision still requires a lot of body-rocking groove music, but filtered through a more diverse sonic palette, in order to stimulate the imagination in various ways. I love the colors of Stravinsky and I also understand the region of the imagination that Herbie was operating in when he made recordings such as "Empyrean Isles." The ambient aspects of studio production will increasingly be a crucial component of that palette.

CB: You mention in the introduction to Dub that one reason there hasn’t been a book length study of dub might be an ambivalence among writers or musicians to treat a music that is both process oriented and sensual to any kind of musicological analysis. During your research, the question that was put to you more than once was: “Does this music really support theorizing?”

Did you experience any degree of suspicion or criticism from Jamaican or U.S. musicians while researching or after the publication of Dub? And there been any ambivalence or confusion in the academic community regarding the book?

MV: Jamaica is a hard place to do interviewing in general - not necessarily because of intellectual issues, but more because the average musician thinks there are millions to be made from selling their story (I call this "post-Bob Syndrome"). Fortunately for me, the producers and engineers I spoke with were generous with their time and happy to speak with me.

As far as the response of American and European academics, most of the reviews have been very positive. Given that most people engage with Jamaican music via the lenses of Rastafari or resistance, I think there's been some grumbling from readers who resist engaging with the music from the conceptual standpoint that I'm taking. Actually, I feel that all of the religious, spiritual and/or political themes are present in my book, but they are sublimated through the technological narrative, and I feel that is one of the book's most successful contributions.

I believe that when it comes to writing about music, great music deserves great words. I don't want to play into the racist/essentialist trap that says black music can only be appreciated from the gut. It can also be appreciated from the head. And just because we approach it from the head, that doesn't mean we can't continue to appreciate it in the gut! Words themselves can be appreciated in the gut, and can in fact open up new ways for the gut to appreciate the music. I plan to continue this approach in my upcoming book about Miles Davis, which is called Technotopia 1969.

CB: In 21st century Jamaica, has dub been replaced forever by ragga and/or other forms dancehall music? Is it a genre now regarded as music our parents listened to?

MV: Yes and no. As a discrete genre, it is associated with the 1970s and early 1980s. But as I mentioned in the book, the innovations of dub have largely been absorbed into the "common practice" of Jamaican production technique. So, like any historically-specific genre, it has made its contributions to the ongoing evolution of Jamaican popular music.

CB: The life and music of Fela Kuti is receiving a level of unprecedented attention in the U.S. thanks in part to the Broadway show Fela! (Directed and choreographed by Bill T. Jones). Music (Afrobeat) as a catalyst for political change is being celebrated not only on Broadway but also on U.S. cable TV shows like The Colbert Report.

You quote Lee “Scratch” Perry in Dub: “When you hear dub you fly on the music.. If it wasn’t for the music, oppression and taxes would kill you. They send taxes and oppression to hold you, a government to tell you what to do and use you like a robot. So they will torment you to death. So when you hear dub you hide from the f---ers there.”

In performance, both dub and afrobeat have the power to affect the political and spiritual consciousness of its listeners.

Has the role of Afrobeat changed since Fela named it back in the 1970s in Nigeria? Was it initially a means for battling political oppression and now more a music for achieving more broadly defined states of liberation and transcendence?

MV: Who's to say? I don't want to wax dogmatically about it. Ten different people will probably experience the same music in ten different ways and consequently have ten different interpretations! Even in Fela's hands, it meant different things at different times; it was variously a means of battling political oppression, a funky good-time dance music, a counter-cultural soundtrack to Anglophone West African bohemia, and a "jazz workshop" for a master big band composer/arranger who also just happened to be a political dissident. It still takes on those various roles, in the hands of different practitioners. At the Shrine, there was Fela's core audience and his devotees, and then there were other people who dug the music but didn't necessarily relate to Fela's politics or lifestyle. And there were those who primarily engaged with the music ideologically and for them, the musical vehicle itself might not have even been so crucially important. The music will probably be all of these things, always. Meanwhile, we have to wait and see what the commercialization of Fela (via the Broadway play and the proposed film bios) means for the future of Afrobeat. I'm sure that there will be classical composers referencing Fela's work, there will be "Afrobeat" patches on Casio keyboards, ad everything in between (including Coca-Cola commercials). That was inevitable once the broad recognition began to be granted.

CB: Let's talk about your Aqua Ife Big Band. I love the chart writing on L.G.C. Odopa (note: You can hear this composition and others on Aqua Ife’s MySpace page).

CB: Can you tell me more about who is writing what for that band? Are the compositions all yours or collaborative arrangements among the dozen musicians who make up the big band?

MV: We have about two CDs worth of material and until now, the compositions and arrangements (horns & rhythm) have been mine. Actually, we cover a Wayne Shorter tune ("Super Nova") and a Mal Waldron/Steve Lacy tune ("Snake Out"), but I re-arranged them. In the future I hope the other players will contribute ideas as we develop a more stable personnel and get more regular work. It's hard to keep a 12-piece band going, believe me!

good stuff, Chris!
you know, I'd always dismissed the dancehall scene as being a conservative reaction to dub and roots, and some of the stuff I heard recently confirmed this for me. but there were a few...(both female artists) who I thought sounded pretty good—reminded me of some of the older toasters like Lone Ranger as well as being technically comparable to hip-hop.

the tracks were Bam Bam by Sister Nancy and Kuff by Shelly Thunder. not sure whether all their stuff is worth checking out, but they were provided to me by a local vinyl dealer in Ridgewood called DJ Chino. haven't seen him around for awhile but he sold records from a shack on Knickerbocker Ave. as if anyone needed reminders of how far from the academic world we sometimes are...