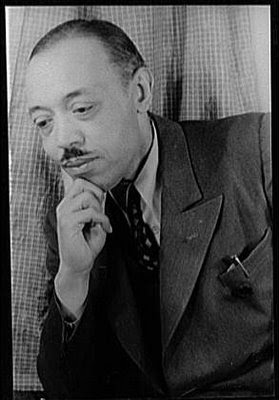 Sunday, March 22, I was able to attend the American Symphony Orchestra's concert of William Grant Still's music. I'd been looking forward to this program for awhile. Performances of Still's music in the U.S. are rare. And the more I've researched Still's biography and music, it is clear that many of his works haven't been performed in the U.S. or at all. For instance, the ASO program mentions that Still wrote eight operas. That really took me by surprise - and I came to the ASO concert with some knowledge already of Still's music and his biography. You would think I would have already been aware of this fact, but nope. And something about the number just hit me. He wrote eight operas and how many of them have been performed here in New York?

Who is William Grant Still? You can read about him at Africlassical, Wikipedia, and here.

I am particularly interested in hearing or seeing the score to an early work of Still's called Levee Land for soprano and orchestra which was premiered in New York in 1926 with Florence Mills. If anyone out there knows of a recording that's available for purchase, please give me a shout in the comments. I am not clear yet as to who owns the publishing of his music, and this may be an issue when it comes to buying his scores. But I've only just begun my research.

There was a really good turn out for Sunday's concert that included a lot of young people in the audience. The ASO did a great job performing three very different pieces by Still. I particularly enjoyed "Africa" (this was the first time I'd heard this composition) but would recommend checking out any of his orchestra works. Still's output was huge - there's a LOT of music to explore.

It's fascinating to hear the music now with some understanding of the historical context in which it was composed. Still composed music from the early 1920's up through the mid 60's (maybe beyond that?) and in each decade the U.S. (and American composition in general) experienced painful and profound social and political upheavals. And with that in mind, when you put Still's biography alongside to George Gershwin, Paul Robeson, and Duke Ellington (to name just three of his musical contemporaries), you are dealing with a complicated multilayered "portrait of the artist" in these United States. I hope all of this doesn't sound glib. If I had more time perhaps I could provide more detailed examples to support my point...perhaps in a future.

Again, does anyone know of an in print recording of Levee Land? Is the score published?
Posted by Chris Becker at 7:46 AM

Contact WGS music. Don't know about a recording, but Judy Still will have definitive info.
http://williamgrantstillmusic.com/

Thanks. I have been in touch with Judith and she has been helpful. Scores and CDs are available for purchase at her site, so anyone interested in Still's music should check out their stock. I just ordered the Minette Fontaine recording - an opera set in New Orleans.

Hi Chris,
I see you've already been pointed to WGS music and by now will know there is a recording (and also a full score reconstructed from old photostats).
You can hear part of the recording on my web site at:
http://www.florencemills.com/music_and_shows.htm#aeolian
See "The Backslider"
There are also several books on WGS
Best wishes

Bill, thank you for the link. Take care. CB