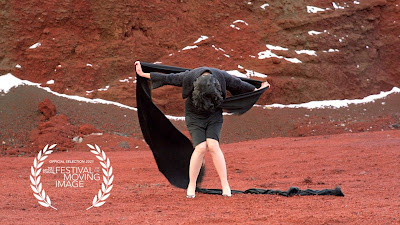 Jil Guyon's split screen video Widow's End has been selected for this year's Artists Forum Festival of the Moving Image in NYC. Due to Covid the event will take place online from October 22 - December 5. This year's theme is The Politics of Emotion.

"The perils of isolation and climate instability meet in this split screen/2 channel video set against the backdrop of a volcanic red rock quarry in southern Iceland. Caught in an extreme, inhospitable landscape, a bereaved woman finds herself enveloped in a swath of black fabric. The intensity of her stillness combines with a stark sound score to form a slowly shifting visual tableaux that explores the terrain where inner and outer realities collide."

Listen to the score for Widow's End on Bandcamp:

Posted by Chris Becker at 6:34 AM No comments:

This is a track that started off as a sketch but has evolved a bit beyond that, imo. It began as an intuitive, sonic meditation on the recent passing of master drummer Charlie Watts. Lee "Scratch" Perry, whose impact and inspiration for so many musicians in all genres cannot be overstated, moved on shortly afterwards, and I'd like to acknowledge his ghostly presence in the mix.
Posted by Chris Becker at 4:10 PM No comments: 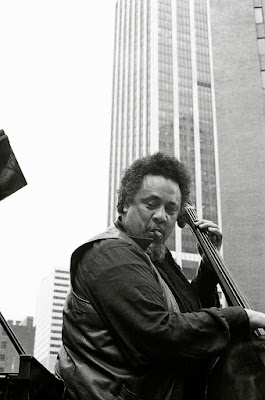 Charles Mingus - Bi Centenial, Lower Manhattan July 4, 1976
My arrangement for baritone voice and string quartet of the Charles Mingus composition "Weird Nightmare" is now available to purchase on SheetMusicPlus. The vocal melody can be transposed up an octave and sung by different voice types.

Posted by Chris Becker at 7:11 AM No comments: 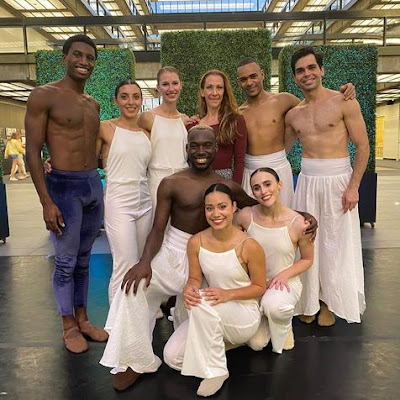 This is choreographer Blakeley McGuire and the wonderful, beautiful dancers of Axelrod Contemporary Ballet Theater who took my re-imagined string quartet arrangement of David Bowie's "Heroes" and turned it into a transcendental piece of ballet, dance and theater. The light and energy of these performers was inspiring for me to witness. Kudos too to the string players who played my music with authority and feeling. The performances took place July 29 - August 1, 2021 at Bell Works, Newark, NJ.

Blakeley titled the dance "Devotion. She writes: "Inspired by the tenacity and devoton of performing artists, audiences and presenters who continued to explore their art and expression for the love of life during the pendemic isolation. It is a love letter to people who refused to let their light dim. 'Devotion' is about the beauty of continuing to walk one's true path."

Score and parts for my arrangement of "Heroes" are available for purchase at Sheet Music Plus.

Posted by Chris Becker at 7:17 AM No comments: 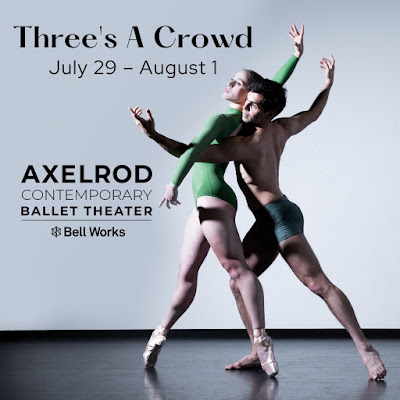 This suite of music was inspired by the work of Houston-based artist Rachel Gardner, and initially composed to accompany an installation of her sculptures titled "From The Woods."
Released June 18, 2021
Becker - Percussion, Synths, Field Recordings
Lainie Diamond - Vocals
Breeze Smith - Percussion, Flute
SPIKE the percussionist - Cymbal, Gong
Wolf howls courtesy of the National Park Service
All tracks recorded by Chris Becker except additional percussion on "Forest" recorded by Breeze Smith.
Edited, Mixed, and Produced by Chris Becker
Mastered by Doug Henderson
All artwork by Rachel Gardner, used with permission.
rachelgardnerart.com
Posted by Chris Becker at 7:39 AM No comments: 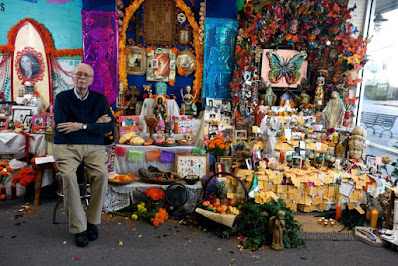 Note: What follows below is an interview I conducted for CultureMap Houston with Macario Ramirez in October 2011. Macario passed away in June 2020 at the age of 86, and I was honored to attend a special reception in his memory this evening. Please enjoy this conversation, and if you are a Houstonian or visiting the city, be sure to stop by Casa Ramirez FOLKART Gallery.

Owned and operated by Macario Ramirez and wife Chrissie Dickerson Ramirez, Casa Ramirez FOLKART Gallery has celebrated and educated the public about Latino culture and art since the it was first established in the early 1980's. Mexico, Texas and other areas of the Southwest are represented in their collection of affordable, often locally crafted art, clothing, and jewelry.

The gallery also stocks a collection of books in English and Spanish with subjects ranging from Mexican cooking to the history of social activism in the Latino communites.

October has (finally) arrived and along with it the Mexican holiday Dia de los Muertos, also known as Day of the Dead. Macario Ramirez describes Dia de los Muertos, a holiday that combines pre-Colombian indigenous traditions with Catholic iconography, as “…a personal expression of love to our ancestors.”

Activities in the weeks leading up to Dia de los Muertos include the construction of altars or “ofrendas” designed to memorialize family and friends who have passed and welcome them back in their non-material spiritual forms. Altar offerings for this annual feast include food, sweets, soft drinks and even alcohol to feed your loved ones now in their spiritual form.

What follows in a conversation with Macario Ramirez about the inspiration for Casa Ramirez gallery, Dia de los Muertos and his commitment to social and political causes.

All in the family

Chris Becker: Your father started a business similar to Casa Ramirez back in 1937 in San Antonio. Can you tell me a little bit more about it?

Macario Ramirez: My father was a part time jeweler…he knew jewelry but he didn’t have the money to stock himself with gold and silver although gold at that time was cheaper. But he did other things in jewelry, designer bracelets, earrings and necklaces. And he did other things to keep a family of eight fed. There were eight of us including himself. So that’s where I get my experience of Casa Ramirez, you know? The imports and folk art and crafts, and the good causes that I’m very much involved with. Locally, I’ve always been involved with good causes.

CM: Were good causes a part of your father’s life as well?

MR: My father although he was busy earning money for the kids, he encouraged us to work in the community and help out as we can. So Casa Ramirez is a very unique folk art place, but also we’re known for teaching the culture…but the good causes were also to support community projects.

When my father died in 1984…well, the shock is there for everybody…but I remember our life with him, how kind he was. My mother also…I was in Mexico (but living in Houston) when I was told my father was not well and expected maybe to pass. I was there as an advisor to a local group of entrepreneurs, Americans, who maybe wanted to do business in Mexico.

CB: Was this was before you opened Casa Ramirez?

MR: Yes. I had a chance even then of going back to Washington D.C. and traveling throughout the country and doing things in the Latino community, and had some offers for some positions. But it didn’t appeal to me. I wanted to come back (to Houston).

So I opened up an import place, a folk art place named Casa Ramirez after my father and my family.

We’ve grown nicely. We know how to handle the business. I know my father would be happy seeing me – what I’m doing now. Not only the entrepreneurial thing, but also the sharing of the culture with people in general.

I saw the Latinos losing their culture as they do in many places, because you kind of have to do American things, assimilate their culture. And I resisted that. I said I’m going to keep doing what I believe in. And at the same time start a business to support my efforts.

CM: So your mother and father didn’t live to see the shop?

MR: My mother did. My father saw parts of it and really enjoyed it. He saw it just as I was beginning develop it. He was very pleased. I had been doing all this other technical, writing, research and administrative work for many years, so it was kind of a relief doing this!

It’s evolved. It’s well known. We don’t take it for granted. When I was a little boy, he’d always say: “You’re good but don’t let it go to your head!” And I know what he meant!

MR: I saw us losing that. I saw the Anglo community not understanding us. And it saddened me. We’re a very vibrant culture, the Latino and Mexican American culture and I wanted to share it. Right off I started teaching it.

CM: Can ofrendas be a tool for education? A way of providing some history of Mexico and its culture?

MR: Most cultures of the world have had a way of remembering their ancestors. There’s some rituals combined into their religions. As a child I was doing the Halloween thing. Get sheets from the bed, put a mask on…I thought it was fun. But my father didn’t like it…because it detracted from November 1st and 2nd. That’s when we celebrate our ancestors. November 1st for children, November 2nd for adults.

There are a lot of personal items you put on altars or take to the cemeteries (the evenings of November 1 and 2). These objects really connect you spiritually to the memory of that loved one.

People enjoy learning about (this) and we almost lost it! I feel that we are credited for a revival. But we didn’t originate it. It goes back to the Aztecs, to other cultures…it’s that old.  We almost lost it here in the Southwest.

MR: I’ve been involved with many movements. I’m old enough now to have experienced the Chicano movement in San Antonio, South Texas and California. I mean actively, hands on. César Chávez I considered a friend. And my family we were migrant workers…and that was very educational for me. So that stayed with me, that feeling to want to help the immigrant. I call them undocumented.

I don’t call them (immigrants) illegals. I tell people sometimes, “All of us Americans are illegal.” Because we came from another place! The Indian was standing there saying: “Who are these white people?”

I’m glad we as Americans are here. I love Mexico. We really love it and try to get there as often as we can. But I was born a Mexican American to Mexican parents. And that was very fulfilling and rich…I’m an American.

CB: Given your experience with the Chicano movement, when you look at what’s going on in New York and Occupy Wall Street, does it remind you of that time period?

MR: Oh, yeah! I’m just hoping they keep it up. And it keeps going. I just don’t want them to be discouraged. I used to protest in Washington D.C. on behalf of the migrant workers. I’m a member of the migrant workers in California. I donate to them and I sell a lot of their stuff here to help them out.

So when I saw these young people, coming out and protesting Wall Street, in front of Chase bank, I said: “Yes! Go for it!” Wall Street is taking notice!

Posted by Chris Becker at 6:15 PM No comments: